Bearer of a Thousand Wounds

Cornelius woke with a start. A gruff and altogether loud snore erupted from Yokin the ox in the stall beside him. Disturbed from his peaceful slumber, the young donkey stretched out his legs and inhaled the morning air. Surveying the barn, he was pleased to find his food and water supply replenished, the ground adequately swept, and Adaios resting quietly in his own stall, which was just in front of him.
Exceptionally beautiful rays of sunshine filtered in through the cracks of the barn doors that fine morning. Lovely smells hovered in the air, and the song of a mother lark brought cheer to the donkey. In the midst of this tranquility, a melodious voice rang from outside:

Hey Hie Hoe,
To the pastures you go!
Out to the golden land
Where the grass is green and grand!

The familiar chant of his master at the break of every dawn captured the attention of Cornelius and awakened the repose of Adaios, his respected but aloof and haughty companion.
“Come now my younglings, to the outside world you go! We have much to do today.”
As the two donkeys were led to the pasture, Adaios bid Cornelius a gruff good morning. “I do detest hard work at daybreak,” he grumbled with an unsatisfied bray and a swish of his tail. “The damp grass soaks my fetlocks, and the mud clouds my shiny hoofs. True, there are no flies at this time, but oh, how soggy this muck is!”
A striking donkey in appearance, Adaios was the type of creature that cared greatly about his looks. He far exceeded Cornelius in beauty and poise. Lustrous was his glossy body and flowing was his mane. Erect was his posture and smooth was his gait. With these gifts, it was not a wonder that he was the favorite of the master.
“I think your hoofs look stunning with or without mud on them,” answered Cornelius politely, knowing how fond Adaios was of a compliment.
“Hmph,” he scoffed in return, turning up his nose. “That shows what you know of beauty. One is not appealing with mud and grass on his fetlocks in the morning. In fact, it is considered undignified. A creature with such beauty as mine ought to address the morning with tidy hoofs. But how would you know that when you never bother with your looks?”
These were the usual remarks Cornelius received from the prideful Adaios. 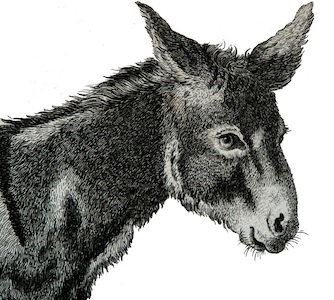 With that said the two animals were turned into the pasture. As was custom, Adaios pranced around in a most fashionable way and exclaimed whenever he came within earshot of Cornelius, “Observe my commanding presence will you, Cornelius. My! How my mane flows today. What good this fresh air does for my lungs!”
Majestically, he paraded towards the much humbler donkey and began gloating as he was inclined to do when he felt particularly handsome.
“Don’t you wish you had a body as grand as mine, or a tail as stunning as this?” Here he swished it deliberately into Cornelius’ downcast face.
Respectfully holding his tongue until he felt certain the arrogant donkey had run out of breath, Cornelius replied, “I am quite content with my own body which the Creator has given me. Is it not enough to be thankful for the gift of life? I need nothing else.”
“Ah, but don’t you wish He had given you more beauty with which to flaunt before lesser animals like the goats in the other pasture?”
“No, for He gave me this form and therefore I am content with it. Do I not have eyes and ears and a nose with which to see, hear, and smell? Do I not have good health and a strong body? With these things I have enough to be satisfied.”
“Oh please, your lecturing bores me.” Adaios yawned and stretched his legs. “What is the use of a body like ours if it is not stupendous? Such pleasure it is to draw so much attention to one’s self.”
Off he went into a brisk trot, braying at the top of his lungs in ecstasy till all the farm animals and birds stopped their work to stare and admire him.
With their morning meal soon finished, Adaios was summoned by his master, bridled, and led off for his day’s work. He was a steed and nothing more. Every morning he was tied to a post in front of the farmhouse where he was saddled and ridden into town. There he spent most of the morning enjoying the pleasant sights of the city while his master went about his business.
For Cornelius, his occupation was long hours in the fields doing nothing but consuming the spindly weeds that threatened to strangle the vegetables of his master. This, although relaxing and not altogether difficult, was relatively dull and a bit lonesome, since he was the only one out in the wide, grassy land.
Having watched his master and Adaios retreat down the road in high spirits, Cornelius stood mournfully alone, small tears of loneliness and despair trickling down his cheeks. “How I wish someone would ride me!” he moaned quietly. Never in all his years had Cornelius carried a human upon his back. That was his one desire: to have someone ride him.
“I wish,” he continued, ignoring the pleasant chirping of three young blue jays, “that I could carry someone; it would not matter how great or small. What an honor I would consider it!”
With no hope of his wish being granted, he sighed and began nibbling the ugly weeds again, careful to never squash the precious fruits or vegetables, which were valued dearly by his master.
Later that day Adaios returned with a particularly smirking expression playing across his face.
“Tut, tut,” he clucked when he caught a quick glimpse of Cornelius, whose eyes were quite sad and ears terribly droopy. “What a face! Goodness only knows why you look so dreadful. Did you eat the wrong weed again? I remember that time when you ate poison ivy and your tongue swelled to three times its size. Ha! It looked absolutely revolting!”
Irritated by these words, Cornelius rose on powerful legs and began to trot away, wishing he were hundreds of miles from Adaios. “I haven’t eaten the wrong weed, nor have I consumed more than what is good for me. I simply feel desolate,” mumbled he in a most dejected state.
Chasing after him, Adaios rebuked Cornelius saying, “However could you feel sad in my presence?  Just look at my gorgeous ears and eyes! Surely they are striking enough to make you forget about your troubles. If not, observe the powerful muscles in my legs! Watch how the sun reflects off my dazzling coat!”
As he cried out these things with profound passion, he began once more to frolic around. As it so happened, the ground in that general area was not particularly smooth or level. Adaios, with eyes lifted upwards, forgot to watch where he was going. Suddenly his hoof tripped upon a snag. Adaios gave an appalling shriek! Uncontrollably he tumbled forwards. Down he went.
“I am dead!” he screeched in agony as he lay all in a heap upon the ground. Twisted was his front left hoof, and his coat had been tarnished with mud. “Doom! Doom and despair! Oh, what treachery! How could such a thing happen to me?”
Here he launched into the most lamenting chant any creature in that pasture had ever heard, though Cornelius could only make out the first stanza. It went something like this:

Upon the ground I lie in shame
For my gorgeous hoof is twisted in pain;
And though the grass is green and gold,
The hurt I feel is too great to hold!

Jessica Andress is 15 years old and resides in South Carolina.